Conceived and directed by

The science behind Charge

Kevin Finnan, with additional material from the Company

Kevin Finnan, Artistic Director of Motionhouse, spends a long time researching, planning and thinking about each production several years in advance of actually making it. He then begins to explore ideas with the Motionhouse team and his collaborators.

First discussions about Kevin’s vision for Charge began in October 2015; more than a year before any movement material was generated. The set always plays a major role in Motionhouse’s work and is designed to bring about new possibilities for movement, pushing the company toward discovery and innovation, so it is always the first element of the show to be discussed and designed.  The ambition is always to create a 360 degree world of light, textures and levels capable of transforming itself from scene to scene in order to give the sense of a journey, so the set is designed in 3D many times before being built.

Kevin met with long-time collaborators Simon Dormon (set designer), Logela Multimedia (digital projections), Austin Lawler (Production Manager) and the dancers and talked about creating a set with hidden delights, the full potential of which would only gradually be revealed as the piece progressed. As a base-line, it had to include a surface that would work with film projection (to continue the filmic visuals through the triptych) but, rather than being a flat surface, Kevin was keen to experiment with three-dimensionality and depth – hence the raised platforms and walkways – and to provide for a variety of entrances and exits. He also wanted to use texture and material in innovative ways. Simon’s solution was to find a strong, flexible material to allow people to be ‘caught’ up and ‘disappear’ inside the set. Height was important so the piece could move upwards into vertical space and create the sense of isolated rooms in high-rise flats for Kevin’s cityscape. Silks and a strop would provide additional means of access between levels and facilitate dramatic aerial possibilities.

“I don’t have to embody every aspect, in fact I have to be very selective. If I go through and try to embody everything as a process, it won’t be an interesting show. It’s got to have a theme and move between human experience and human understanding and that’s the interesting tension.”

The first time the dancers come together to begin creating Charge is in February 2017 when a steel outline of the set is constructed in the rehearsal space. With each stage show, Kevin takes a risk to push the work on to keep the performances fresh and exciting for the Motionhouse dancers as well as their audience. With Charge, the risk is literal. Over the past couple of years, the company have been working on a different type of physicality, absorbing into their contemporary style other techniques – primarily circus – so Charge is shot through with daring ideas. The six dancers lift, climb, hang, swing, fly, throw and catch each other from every conceivable direction working at the extremes of possibility: one minute they are moving precariously between giant, balancing structures on the floor; the next, suspended upside down, fifteen feet in the air, changing position and passing bodies between them while the audience looks on and holds its breath. All the movement evolves gradually from a collaborative devising process.

After daily class, some rehearsal time is spent learning and experimenting with precise and intricate choreography prescribed by Kevin; the rest playing with the possibilities the set allows. Pulleys, strops, harnesses and silks are added to the structure during this phase and the dancers work on a variety of distinct movement ‘briefs’ with crash mats to try out and practise the more risky moves.

Between February and July, the dancers work on a series of unconnected ‘briefs’; open-ended movement tasks with clear parameters and specific instructions but with no meanings, moods or any end-games attached to them. The scenes and chunks of scenes are recorded on a whiteboard. Everything is recorded on video.

By March, the company have a list of scenes, including BRAIN, FROGS, FRANKENSTEIN, SYNAPSE, HEART, HEART ATTACK & STROPS DUO. The scenes are given names as easy shorthand for quick reference and recorded on a whiteboard.

Throughout the spring, whilst they are creating Charge, the company has been touring Scattered, another of Motionhouse’s touring productions. In April the whole company goes to London for a week-long run of Scattered at Sadler’s Wells The Peacock theatre. In May and June, a busy summer begins: some members of the company are busy in Denmark working on a hugely complex European City of Culture project which will  be performed in September 2017, whilst the rest of the company tour the company’s outdoor repertoire of work.

Kevin continues creation with the company members who are not touring, and coordinates the input of his Charge collaborators.

In July, half of the Motionhouse dancers are performing the company’s summer outdoor touring programme; the other half return from Denmark to Leamington to work on Charge. They create new movement material and refine others, all the time referring back to video footage taken earlier in the year and recording new progress. This is a comparatively new way of working for Motionhouse and Kevin is working to find his arc for the show – a through-line to connect all the scenes in an order that will tell the story with maximum emotional impact.

“To assemble the narrative you aggregate ideas around themselves. It’s like looking for a DNA chain – you kind of connect the ideas themselves and they evolve their own logic”.

By this point, the whiteboard records 13 scenes chunked into 3 parts. Each scene is now copied onto separate pieces of paper and stuck with sellotape to a gym mat! This is so they can be moved around easily to visualise and think through possible arcs. Some scenes seem too transition easily into one another (the Frog section into Franketta into Frank for example) but others remain obstinately apart. 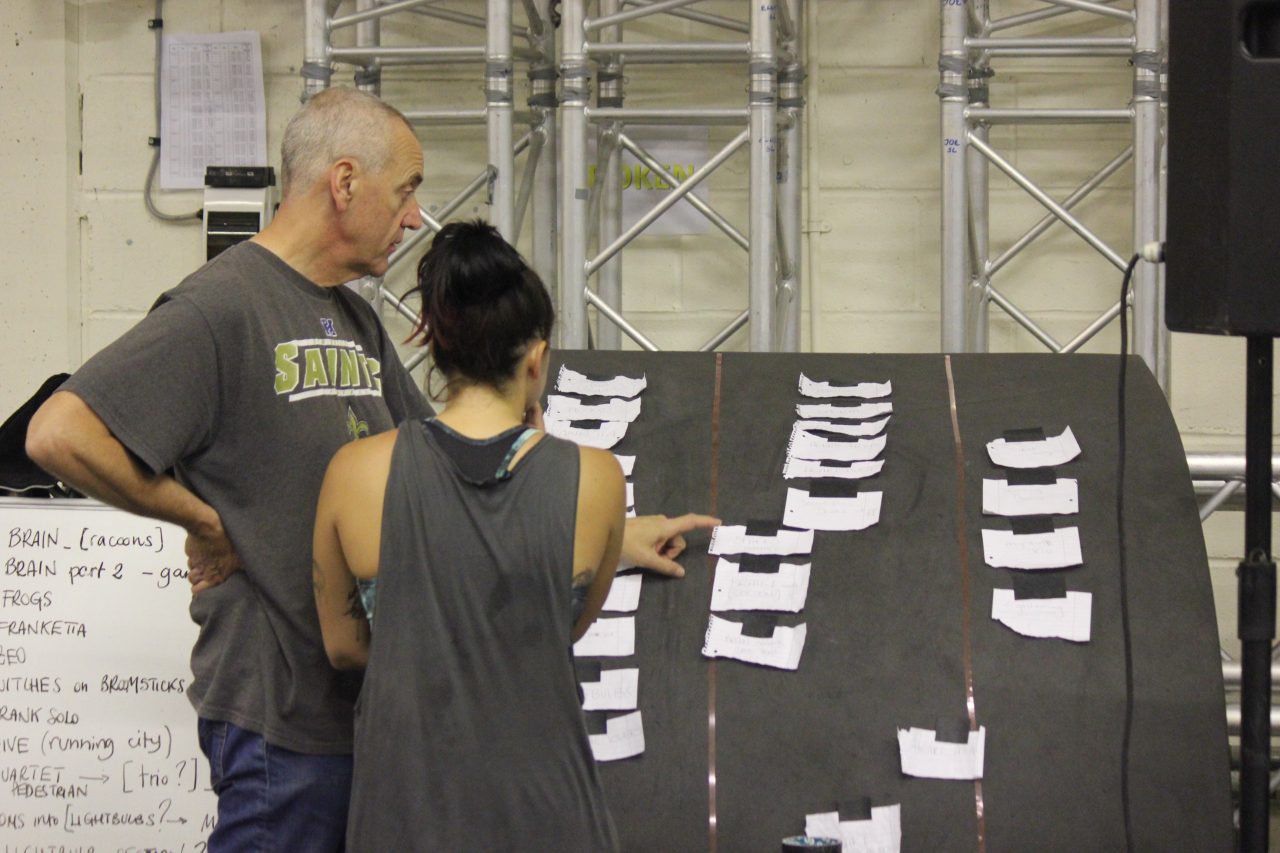 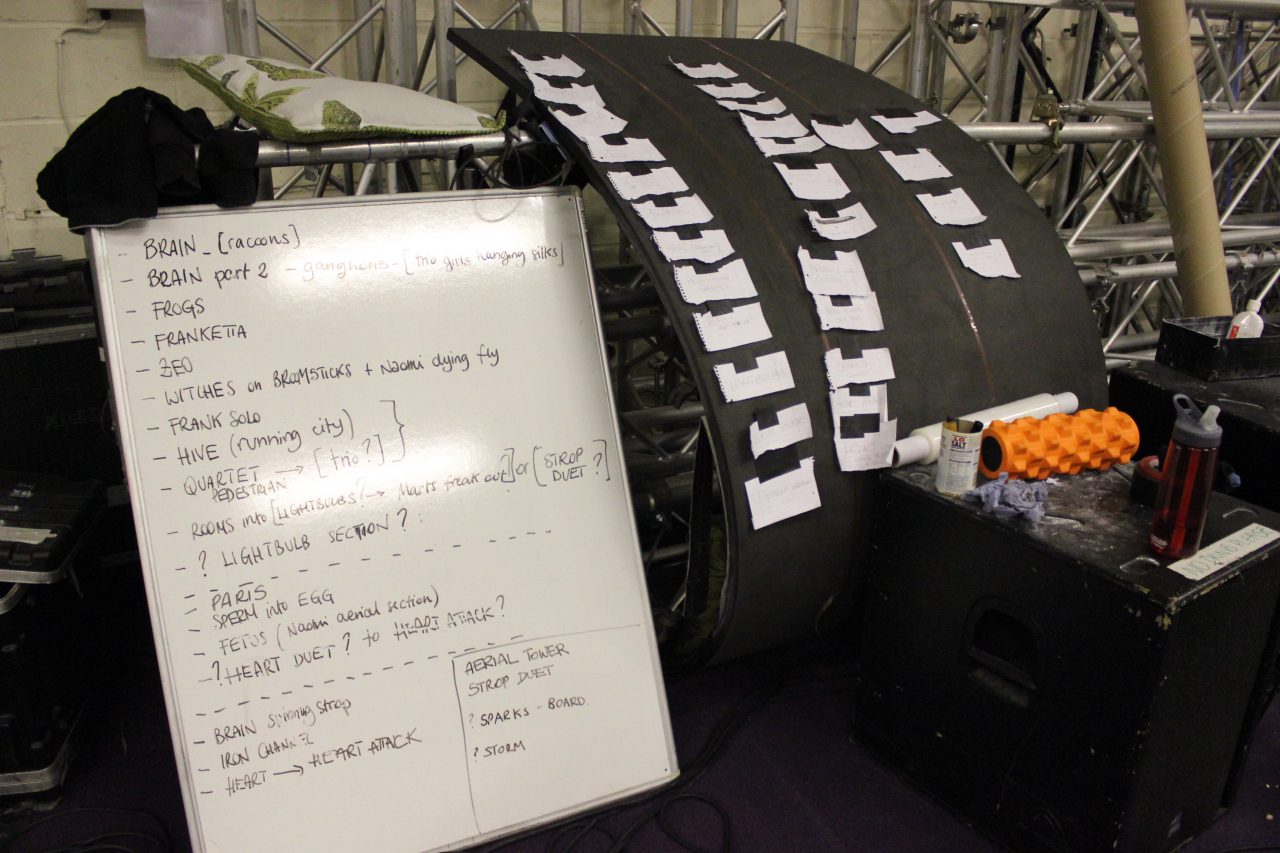 “One very simple thing would be to do what we did in Scattered which has a colour logic: it goes from white to blue to green to yellow to brown which are the colours of the planet as seen from space. For Broken we started with the big bang and we come to the present day. With Charge we could have started with the body, become urban and finished environmental but it would be too much like Broken so I can’t do that. Instead I’m trying the more complex thing of weaving in and out of a story”

“I can feel it. There’s lots of great stuff in there. I just need to bring it out. It’s this whole thing about the brain: if you didn’t have a spark in your mind, you couldn’t love anyone and we are just the sparks in our brain and there’s sparks in this world. We’re all one thing”.

It is always interesting to consider how creative decisions are made (never more so than when the subject matter itself concerns bio-electrical impulses that lead to specific types of brain activity!) More often than not, sheer hours of hard work, busting a gut and logical thinking will not unlock the key. Instead a thought will float in when the mind feels least prepared but is free to meander on its own terms.

“It’s like there’s a big 3D carousel of images that goes around in your mind and the information keeps coming and then, at certain points, you allow your mind to wander from it and you can free-associate these pieces of information and resist fixing it for a while and it begins to connect itself up in new ways in your head – and then you start to see…”

The company are away for the whole of August, creating and performing a huge and enormously complex commission: The City of Culture project in Randers, Denmark Watermusic. Charge takes a back-seat.

Rehearsals restart in earnest, with just a month to go before the premiere.

The rehearsal space is opened to local school groups who watch the company practising, recapping and refining material.

Following weeks of stepping away, working on other projects and looking back from a distance, Kevin decides on his through-line for Charge: a relationship story about two characters who are “always there, holding things together”. Told in flashback through memories, the narrative arc of their story creates a structure allowing many of the scenes to settle into place. But there is still too much material – over 160 minutes – and Kevin would like just 70. A difficult decision is taken to leave out the set of four ‘sparking hand’ duets. One of the dancers refers to “Kevin’s special scissors”: it is hard for them to see material they have invested so much in, being left on the cutting room floor. Some of the material is re-worked into the mother-daughter duet and the ‘lightbulb’ duet. There is also a suggestion that the material may be revisited as the basis for a new dance in next year’s outdoor touring work.

A final decision is made on the order of scenes. Sophy, one of the composers, travels down from Yorkshire to prepare for making final edits to her compositions; Professor Frances Ashcroft visits the company for the first time and watches a rehearsal to find out what Kevin has made with her life-work. Logela are also in the studio testing their film against sections of the dance. 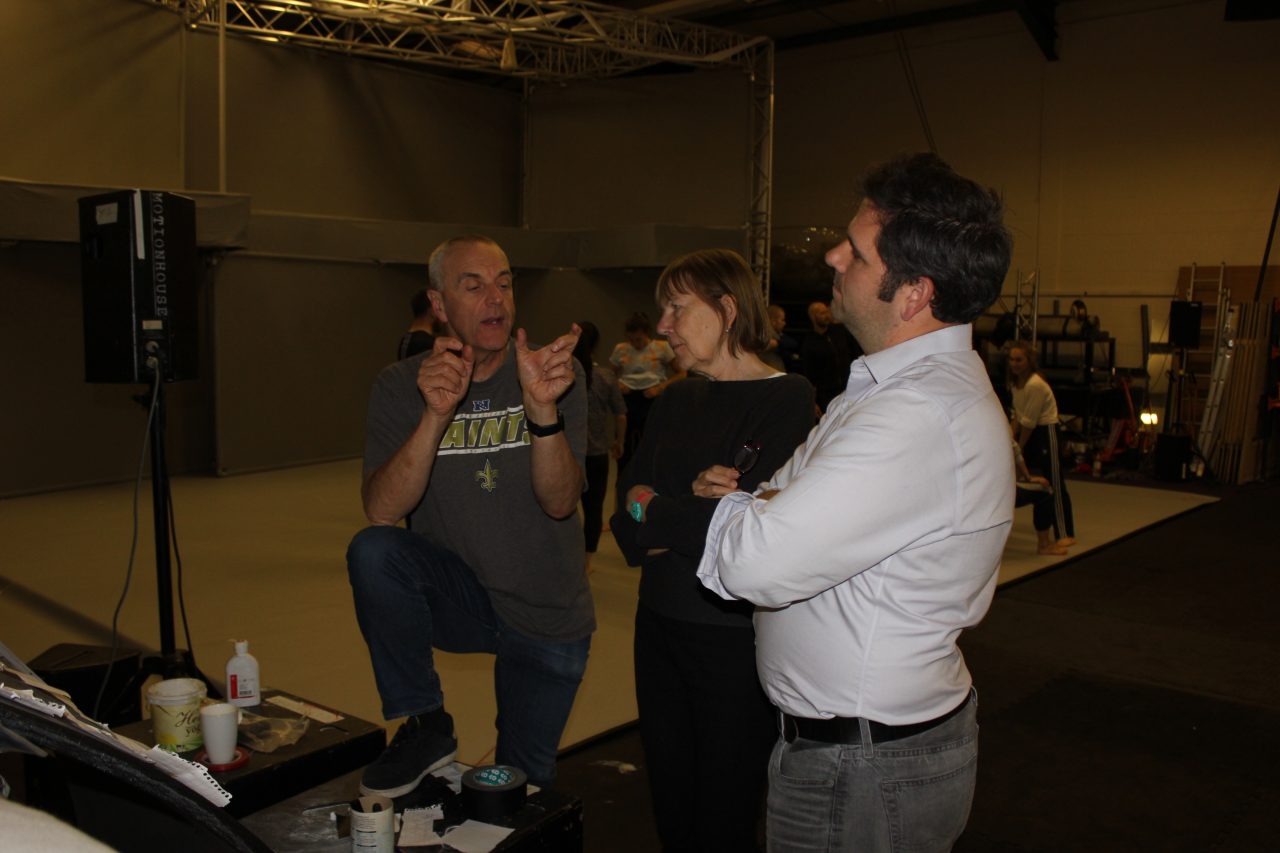 Tour venues are invited to the warehouse for an exclusive preview of what to expect. 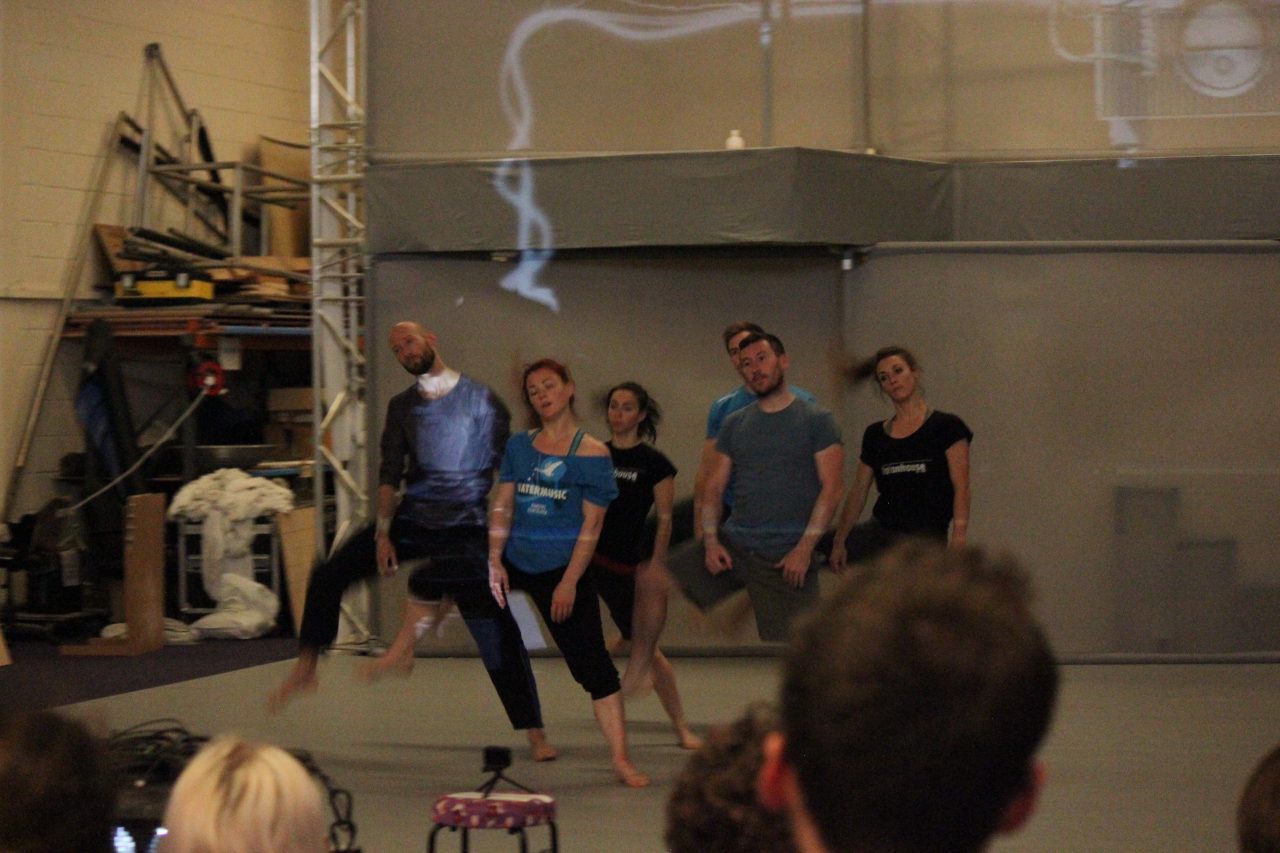 Final updates arrive from the composers and the film company. Movement, film, sound and light dovetail together and two years of planning and imagining are finally realised.

Get in at Warwick Arts Centre: Technical and dress rehearsals.

Charge is supported by